Weekly Photo Challenge – Contrasts: I wasn’t looking for the sign of the cross but as I have explained in an earlier post, foreign churches provide respite and salvation from the beloved’s own religion – shopping.  This one was especially cool and dark, in stark contrast to the heat rising from the narrow streets of Lucca – ‘hotter than a match head’:

Outside in the bright light, even the locals seemed to be struggling with the heat: 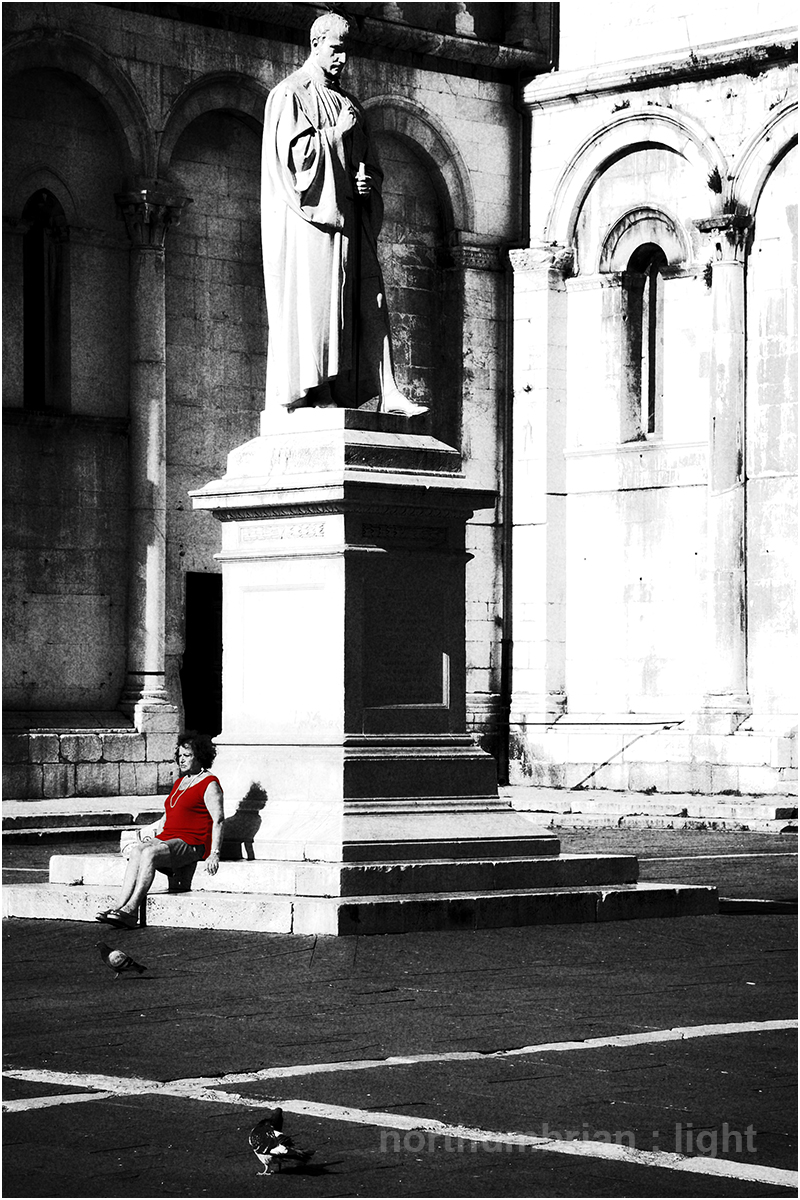 Weekly Photo Challenge – Extra, Extra:  This mysterious lady appears as though an extra in her own movie.  It was taken near the railway station at Riomaggiore, one of the villages of the Cinque Terre in northern Tuscany.  Photography can be intrusive, particularly when the subject realises what you are doing.  As she turned towards me I was expecting a scowl but instead received a perfectly glorious smile – unforgettable.

Travel theme: Unexpected – We first visited Mochignano Chiesa in 2007 when the sun shone in a clear blue sky for the entire two weeks. When we returned in 2009 we knew about the cowbells and the cows that fidgeted all night, the farmer’s dogs that barked at the sound of a moth and the bells in the adjacent bell tower that could wake the dead. What we were not expecting was sweltering heat followed by torrential downpours and thunderstorms, a weather sequence that lasted the entire fortnight. 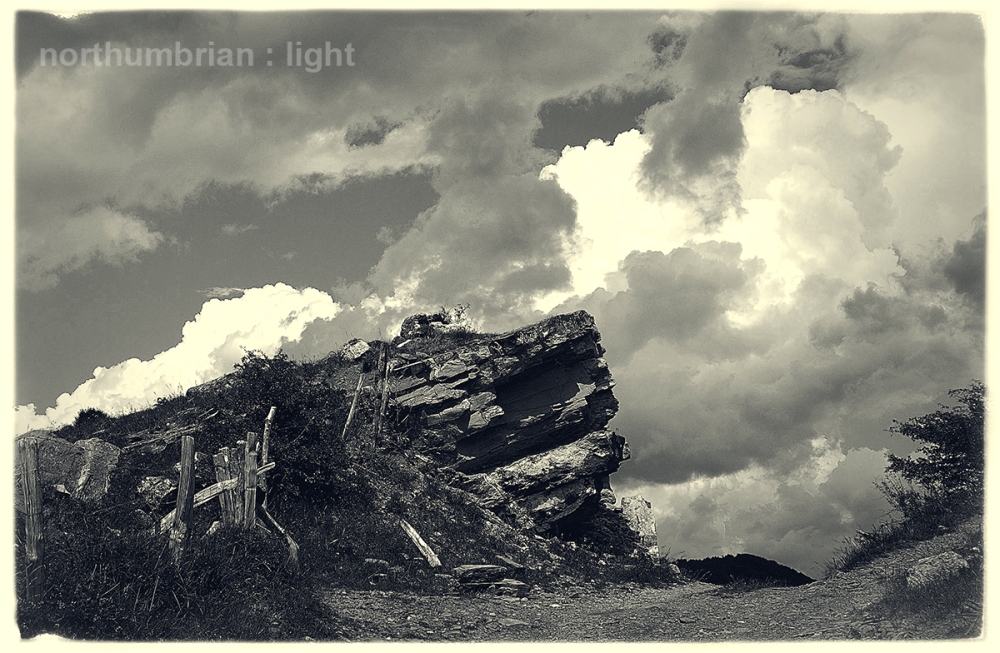 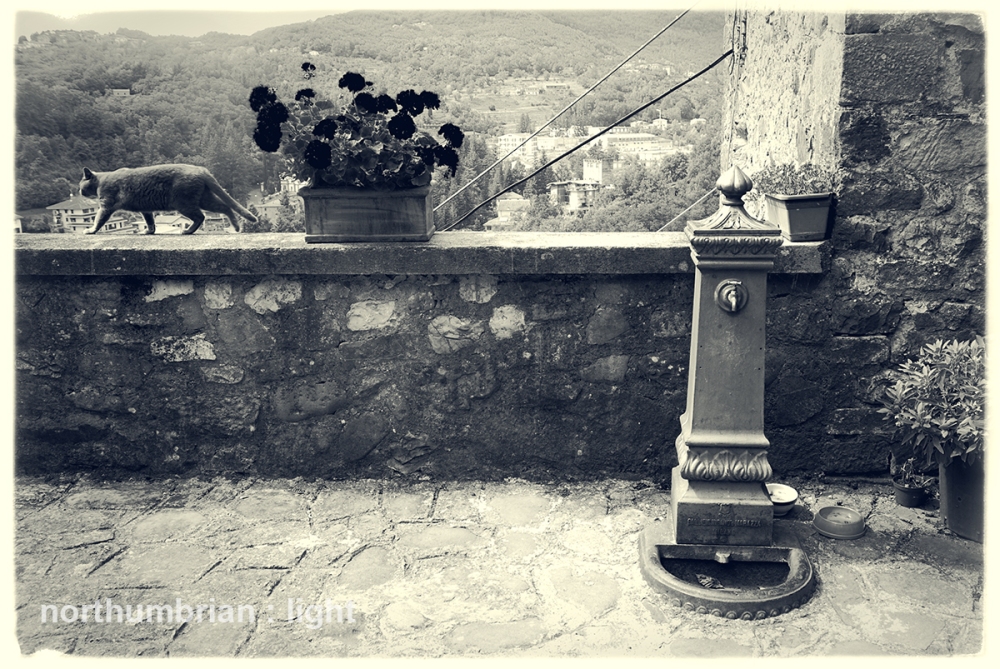 Mochignano Chiesa is a small hamlet in the Tuscan hills above the sleepy town of Bagnone where nothing, but nothing ever happens. Imagine our surprise, when, on our return home, Bagnone was suddenly in all the news – now that was unexpected!

I recognise Antonio Razzoli, the owner of the newspaper shop – I promise you Antonio, it was not us 🙂

Weekly Photo Challenge – as soon as I saw this week’s photo challenge I immediately thought of a long ago trip to San Gimignano and the views from the towers.  I don’t remember if this is true of all of them but at least one of them is ‘hollow’; in other words there is nothing at its centre such that the iron stairs ascend its inner walls surrounded by a void.  This not only demands a head for heights but a degree of faith in the local civil engineers.  The pictures were taken in early September 2001 from Torre Grossa which stands at 54 metres.  As cinema buffs will know, the continued existence of these towers is entirely due to the bloody-minded grit and determination of Judi Dench and Maggie Smith et al (Tea with Mussolini) ;-): 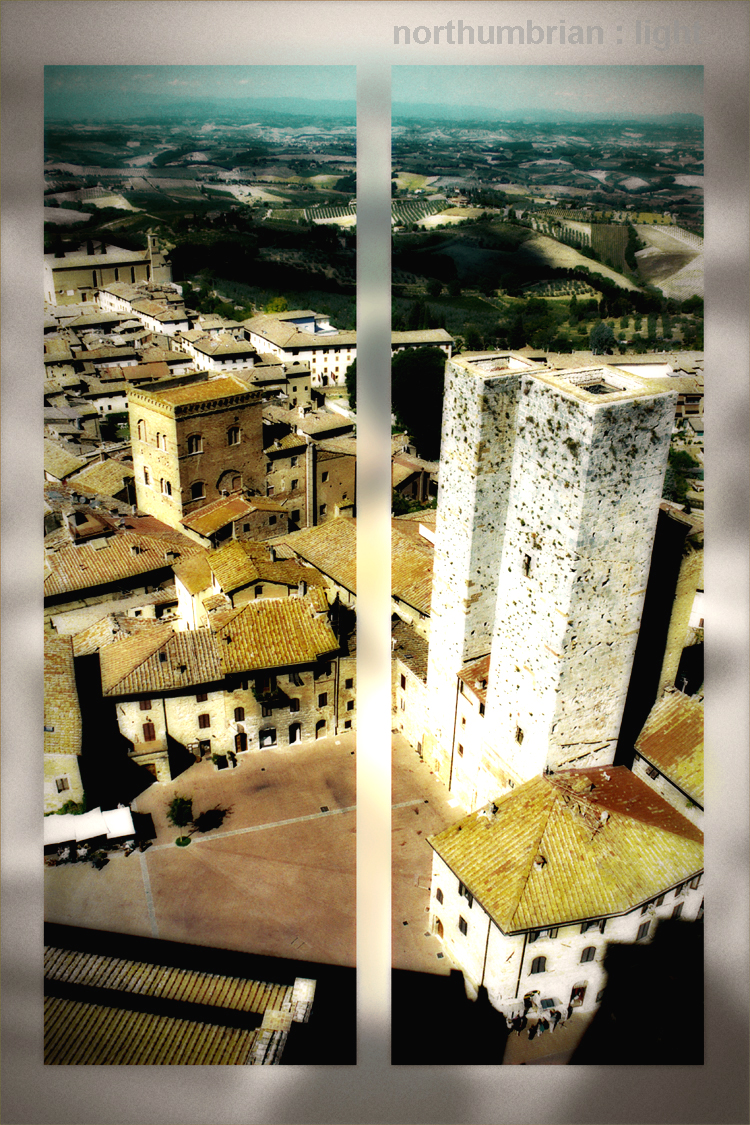 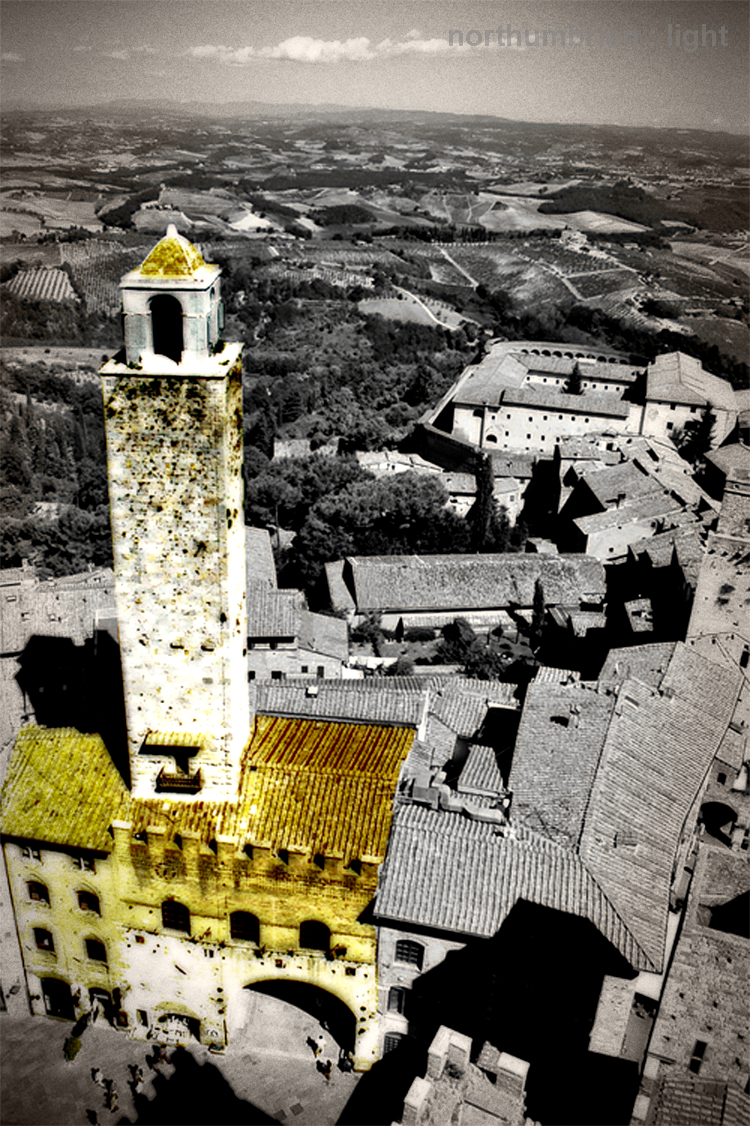 The snows have disappeared from Northumberland and now it is raining, constantly.  In this thoroughly depressing weather it is good to remember the dry heat of summer, not something we have experienced much of in the UK over the last two years. This photograph seems to capture the much missed warmth of an Italian summer – there is an intense heat that seems to be burning down on their shoulders and rising from the road – is it my imagination or are those paws intentionally floating above the tarmac.

The picture was taken in the small hamlet of Mochignano Chiesa above Bagnone in northern Tuscany in 2007 – take me back. 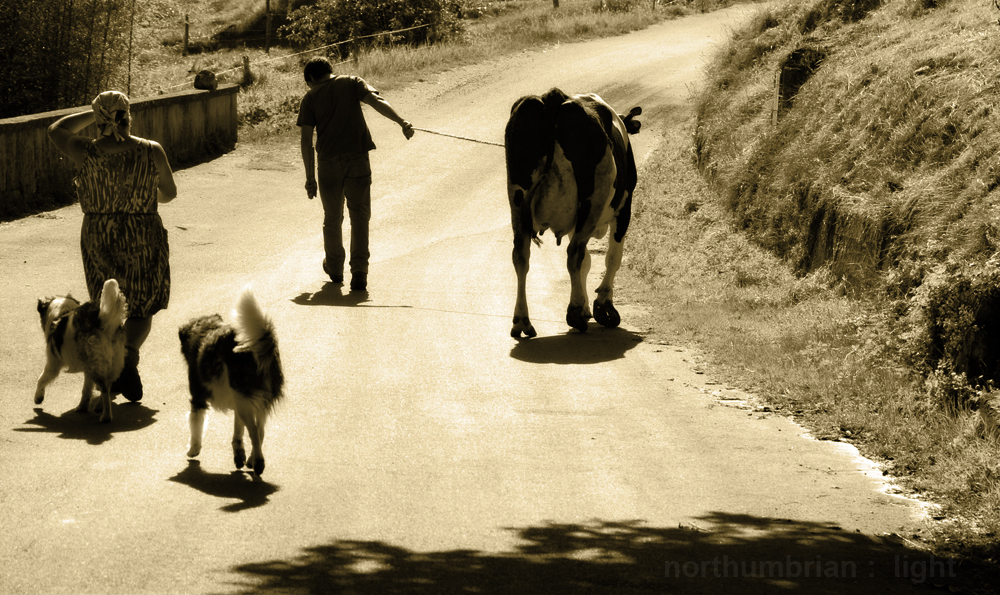 This wedding photograph was taken on 21st October 1921 at Longparish, near Andover, Hampshire.  The bride is Florence May and the groom Frederick Earnest, my maternal grandparents.  The leaves on the ground confirm this is an autumnal event whilst the general lack of smiles reflects the solemnness of the occasion; it was not a happy union.

The original picture is badly faded but increasing the contrast has resurrected the disappearing faces from a distant past although they remain, for the most part, resolutely glum.  I confess I am having some difficulty in identifying the participants at the wake, even May doesn’t look herself but there is no mistaking Fred who retrospectively, would undoubtedly wish he had been elsewhere.

I am certain that the man standing second to the left from Fred is his father, Benjamin Buscall Deaves (all forenames) and the lady seated to the right of May is Emily, her mother whose headgear is completely out of step with the times and the other guests.  She was still resolutely wearing such hats in the late thirties as other photographs prove.

This photograph brought to mind another such event I witnessed in northern Tuscany a few years back.  A modern occasion, the bride is not an exhibitionist; she was forced to lift her dress to see her high heels lest they skewered themselves between the boardwalk cracks.  I once entered this in a photo competition sponsored by a car company – it was entitled Alfa Male.

Appearances can be deceptive – the assumption is that the bride could not be happier on this, her great day.  This was her summoning her new husband a few minutes later. 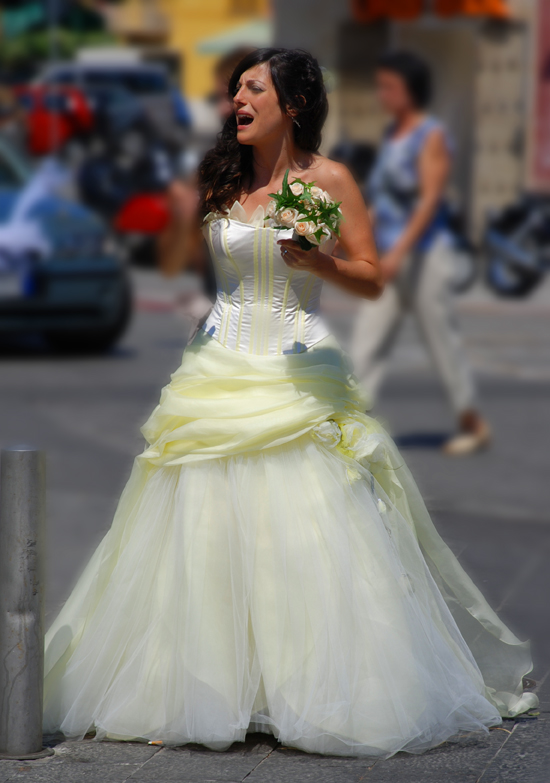 Like Fred and May, I am certain they lived happily ever after.