… but not forgotten.  This is an unusual image, unique among the family archive for its outward display of affection. Their emotional roles were reversed; my dad was the soft place to fall, my mother the disciplinarian. My upbringing was unbalanced – “just wait until your dad gets home” held no perils for me.

They could argue enthusiastically and, frequently, I was the subject of the disagreement. My dad was a constant voice of reason but his exasperation could, in extremis, set him afire. Ultimately though, he was always fiercely loyal to mum and I learned, too early, not to depend on anyone.

And yet, I still miss them both.

Jonathon Meades captures this generation perfectly in An Encyclopaedia of Myself :

Two world wars, economic depressions, genocidal dictators, material privations, the ominpresence of death … enduring such stuff is not propitious for the embrace of affective ostentation, for the desire to get in touch with our inner entitlements, for the infantile need to share our pain, for the comfy validation of our self-pity, for the slovenly annihilating of our restraint, for the quashing of our shame.

For the public exposure of our past, for the tortuous excuses we make 😉

My mother was born on 13th August 1923, she would have been 90 today.  This picture was taken around the time my parents were married in June 1943; she is nineteen and my dad twenty two.  Just over nine months later my sister arrived into a still war-torn world.  I know the shape of these events but none of the detail and now I will never know: 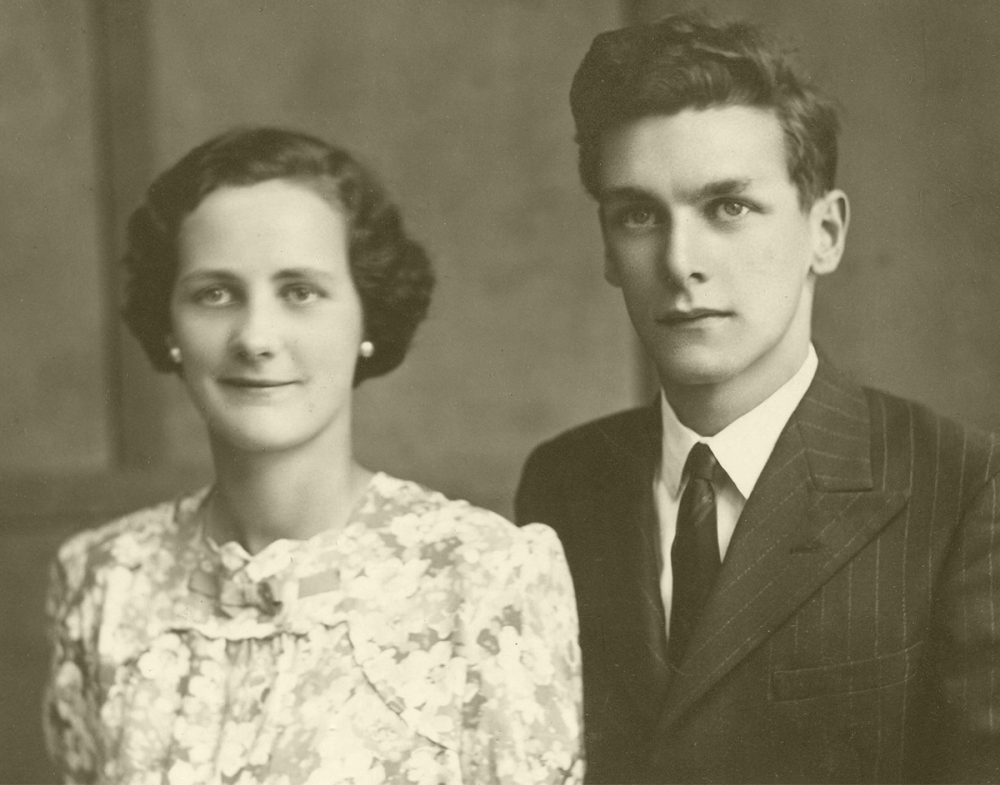 I was told little about her early life and knew too much of her decline.  In the final months I was not even sure it was mum talking – she had been known throughout her life as Peg, sometimes Peggy but when she moved into a nursing home all the staff referred to her as Marian – her first and until then, unused Christian name, except the family always thought it was Marion with an ‘o’ and I think she did too; her birth certificate confirms the nurses were right. So the sign on her door said Marian; I don’t think I ever really knew who it was on the other side.

Old photographs never lose their capacity to surprise, particulalry when they appear out of the blue.  I have digitised and reprinted a large number of old photos belonging to my maternal grandfather but I had never seen this one before.  In later years my mother developed a habit of creating random albums, haphazard collections with no obvious consistency of place, subject or time; this one was tucked in between my sister’s wedding and her grandchildren playing in the garden.  Perhaps this is no bad thing, each page has the capacity to astonish, there being no clues as to what might appear next; poor mum’s mind developed a similar trend towards her end.

The car is a 1920s Ford Model A and the small girl is my mother.  They are probably all Taylors, my maternal grandmother’s side of the family.  The man on the far left is her grandfather, William and the bowler-hatted gent is Uncle Charlie, thought by mum to be several shillings short of a pound.  The lady is her grandmother Emily Susan but the young man in the flat cap is unknown to me, lost with my late mother’s memory.

The picture was probably taken at the family home near Bransbury which was demolished in the fifties when the Andover to Sutton Scotney road was widened.

Mum was born into a different wholly unrecognisable world.

On 13th August 1923 her Dad, Frederick Earnest T was 31 and Florence May her mother 27 – a pretty young thing who turned into our Grandmother, a woman so alarming I called her Mrs Kipper and cried buckets if left alone in her company.  Fred was different though – a handsome warm man who smelled constantly of Three Nuns pipe tobacco which he rubbed in big brown scarred hands.

Fred’s life reads like a Michael Palin Ripping Yarn, a life not possible today.  Ordinary people in ordinary lives doing extraordinary things. Apprenticed as a motor engineer after leaving school, his entire life was enmeshed in the mechanical.   A member of the ‘Terriers’ he went to Gallipoli in 1914 and then transferred to the Royal Flying Corps in Egypt.  Between the wars he continued to work in motor engineering and in his spare time took part in motorcycle trials, built a Lea Francis from two wrecked halves and then raced at Brooklands.  By combining his passion for cars with a keen interest in local football he organised what was claimed to be the first floodlit match in the country; they simply surrounded the pitch with cars and turned on the headlights.  A full time officer in the local fire brigade, he raised enough money for Andover’s first ambulance and during World War II fought the fires at Southampton and Portsmouth blitzes.

Mum met Dad at a dance although the precise date and circumstance are vague – a surprising outcome – Dad was very athletic – a good tennis player, captain of cricket and football at Andover Grammar but in my entire life I never once saw him dance.  It seems remarkable to me that they found each other – a short adapted quote from a Garrison Keillor story:

The stove stands in the middle of the floor where decades of dancers have stepped up and down to keep their feet warm and the benches run around the walls inscribed with old thoughts of romance, some of them shocking to a child, news that mother or dad instead of getting down to business and having you was fooling around planting big wet smackers on a stranger who if he or she had hooked up with her or him, you would not be yourself but some other kid.  This terrible prospect from the past makes a child stop and think.

Chance is a wonderful thing and that is how we are here today – not just me and Pat but everything and everyone that has sprung from that seemingly random but surely inevitable, intended event.

Mum and Dad married in 1943 in the depths of war – she was only 19 and almost immediately my sister began her journey into life – not a baby boomer but a war child, a remarkable act of optimism.

In 1951 I was born to the mother of invention.  In a tight corner, looking for an excuse, making a quick decision, providing reassurance, Mum had a quick-fire, quick-witted imagination.  Five examples from life:

Manchester was near where we lived, grew up and eventually flew the nest.  In the 1950s and 1960s it was a black and grey landscape.   The fogs came and stayed for weeks, fed by all those home fires and  the heavy industry of Manchester’s Trafford Park, a place of smells and smoke where Dad worked at ICI;  Trapped Under the Smog of the Industrial Blanket.  It was a partially derelict city where bombed-out buildings remained for years after the war but we were, nevertheless, proud Mancunians.

You can place a person’s position in history by the people they admire and the things they enjoy – Mum’s favourites were, in order of preference to a bored young boy, Coronation Street (as it used to be) Billy Cotton, Russ Conway, Val Doonican, Andy Stewart, Kenneth McKella, the Black & White Minstrel Show, the Queen Mother and latterly Prince Phillip.  No wonder we rebelled!

After Munich 1958 she became a staunch supporter of Manchester United with great admiration for Matt Busby and the precious surviving Babes – so the gene has been passed down the generations.  We are reds not blues so we will not mention a more recent tragedy.  There were limits though – I once inscribed Up the Reds in 6 foot letters on the beach at Newquay and was immediately told to rub it out for fear we were thought communists.

Imagination, single minded determination and a quick wit, she passed on those genes down the generations too.  This is the remarkable sequence of pictures I carry in my head based on some photographs from the time.  It is early summer 1941.  She is standing on the platform at Andover Station waiting for a train – in her hand a small brown suitcase loaned by her father.  She is still only 17. Did her Dad really know where she was going, I like to think not.   The station is buzzing, the line was used heavily by the military throughout the war.  She is in a summer dress, light cardigan, flat white shoes and white ankle socks.  She is travelling to see Dad and we will suppose it is via London.  She is a young girl in a closed carriage compartment pulled by a blackened steam train – when she reaches Waterloo, she pulls on the worn leather strap to open the window and twist the outside handle to open the door, careful not to get marks from the filthy carriage on her clean summer dress.  She walks from Waterloo to Liverpool Street Station determined to catch the train to Cambridge.  She doesn’t have enough money for tubes or trains and anyway feels safer alone and above ground.  There is evidence of war everywhere – bombed out buildings, barrage balloons, sandbags, the Home Guard.  Later that day, exhausted, she finally reaches 8 Oxford Road Cambridge where Dad is living in digs with a very watchful landlady.