Jim Clark has been mentioned in a couple of my recent posts – for those that remember him fondly, this is a brief reminder of his remarkable, diverse talent.  For my non-UK based/non-motor racing aware followers, something by way of explanation:

Clark was my first and last real hero and to this day his reputation and memory remain intact and untarnished.  For a generation of enthusiasts he represents a time, a place and the type of self-effacing reserved genius who is no longer allowed to exist in the age of the ever-present microphone seeking a sound bite, however inane, however inarticulate.

I saw him race just a few times and he did not disappoint.  In a Lotus Cortina he danced like a clown on the high wire making the rest look ordinary.  The fuzzy picture from the 1966 Gold Cup at Oulton Park is straight from Boy’s Own.  Clark in a Lotus Cortina had been in pursuit of a hugely more powerful Galaxie for most of the race, losing touch on the straight, climbing into its boot through the corners.  With just a couple of laps remaining, the American hardware ran out of brakes coming into Old Hall, slammed into the sleepers and flopped into the middle of the circuit. I caught the moment on my dad’s 35mm Werra – Clark can just be seen squeezing by the wreckage before taking the chequered flag in front of an adoring crowd.  Fifteen years old and your hero performs according to the script, all my planets were in alignment.

His untimely death at Hockenheim, a second-rate race at a miserable place, on April 7th 1968 rocked a racing world almost immune to such frequent tragic events.  As an introspective teenager with a consuming passion for motor sport, I was devastated.  Angry at the injustice, disbelieving and deeply saddened – it was like ‘your team’ was no more; imagine if Man United had simply withdrawn from the game after Munich.

Watching cars race by was never quite the same again. 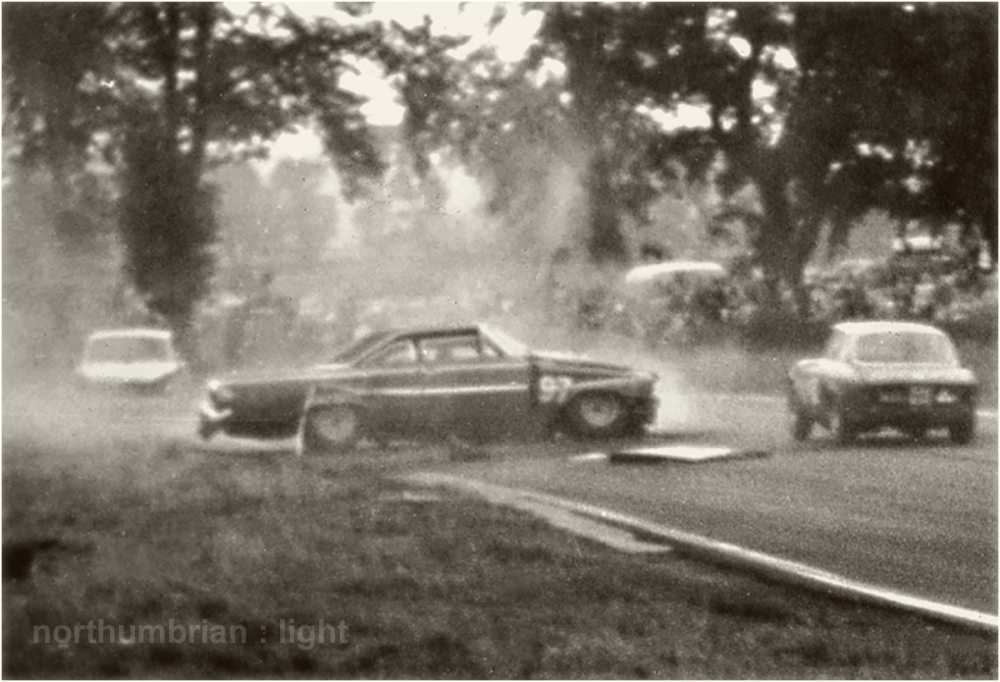 Brian Muir, the pilot of the low-flying Ford Galaxie escaped unharmed – shaken but not stirred:

‘Semper Augustus’ was an expression generally associated with a modest man who was one of the great Roman Emporers. Clark was equally modest and it is the word ‘incomparable’ that always springs to mind when speaking, thinking or writing of him. That is just what he was and has remained – Barrie Gill.